History of Garments Industry: Cloth is the second item among the human basic needs. Without food, man cannot live and without cloth, man cannot live also in society as a whole. Cloth is mainly mandatory to cover the shame of human beings and to ensure vital protection from environmental detriments (weather-related unbearable conditions). Satisfying the various issues and ensuring sustainable conditions, people use cloth from birth to death. Before launching the technology to produce cloth (as it is not a natural outcome of the environment), people used various items viz. leaves, straws, animals’ leather, etc. Later, they started using the thread/yarn in the case of clothing and the yarn is the prime, inescapable, and doubtlessly base of the modern cloth. It’s not well identified, when & where the initiation/inception of using the yarn in clothing started. Now a day (after the introduction of modernization), people use cloth not only to cover the shame but also to derive extraordinary fashion and the later cause (fashion) defeats all time and all events the necessity of cloth. From the worldwide scrutinization, it is clear and supportive those huge amounts of money of all level of people are to spend in acquiring their respective cloth according to their respective position.

People started using cloth-making by hand weaving. The fabric making based on preliminary machine use is the second stage of introducing the onset fabric production. People had to invest a long time and heavy physical task to weave the fabric with the yarn collecting from nature. This launching of the cloth/fabric was hardly found all over the world as only a few places or countries could be successful in the result of producing the fabric. After the stage, people started to invest their money, patience, time, industry, persistency, practice, initiative & endeavor to inaugurate fruitful introduction of the modern machinery and backward linkage activities to produce adequate fabric enough to satisfy the worldwide garments need.

The history of making apparel (to wear) from plain fabric using the machine has been started two hundred and 50 years. It is known that in 1775 AD. Charles Frederick invented the first sewing machine and patented with which the stitch-like hand stitch could be made and this machine is undoubtedly the first one of the sewing machines of the world. Isaac Merrit Singer invented the first commercially successful machine in 1851 AD. In 1945 AD in Japan, the Juki Company of garments machine was established and it is the vital garments machine producing company of the whole world. In 1947 AD, the Juki Company produced the first garments machine of its own origin.

In Bangladesh, there are approximately 5000 garments factories among which 2/3 factories are situated in Dhaka while the rest factories are in Chittagong. Most of the garments factories of the mentioned ones are directly involved in manufacturing readymade garments while some are backward linkage ones. Among the factories, some are foreign-invested as the reputation of the Bangladeshi garments easily attracts the foreign buyers for their quality, timeliness, smooth delivery, and the comparative less cost is another vital issue of its wide acceptance.

The amount of money received from exporting Readymade Garments in Bangladesh, about 75% of the earned currency has to be backed as the cost of importing fabrics and other related accessories. Some of the entrepreneurs have taken initiatives to establish the backward linkage company of the Readymade Garments factory to produce interlining, button, rivet, pocketing, twill tape, Velcro tape, elastic (general & adjustable), various pins (viz. lock pin, crocodile pin), hanger, poly, drawstring, thread, label (main label, size label, care label), barcode card, hand tag, price tag, satin tape, scotch tape, gum tape, both side gum tape, spot remover item, carton, garments tissue paper, etc. If within a very short period, if we could be able to produce all the Readymade Garments related items in our country with the satisfactory quality as the buyers expect, we can be able to be financially sound as then the foreign currency will not be backed again and the amount of the actual receiving will easily impact more efficiently on the national economy.

Now a day, the rate of producing Readymade Garments in Bangladesh is increasing day by day. The main Readymade Garments are manufactured in Bangladesh are woven, knit & sweaters where the quantity of knitting is high and the second position is woven and the ultimate is a sweater. In our country the less priced knitting items mainly T-Shirts are vastly manufactured because the buyers choose to produce the less priced knitting items here. Again, sports items (knitting sports items) are also pointedly manufactured here. All kinds of underwear viz. brassieres, bikinis, vests, etc are mainly manufactured here.

Among the woven items, shirts, pants, trousers, shorts, three-quarters, jackets, skirts, gowns, blazers, overalls suiting, etc are mainly manufactured. In addition to the above list of woven items, other items are also made here according to buyers’ specifications.

The main, vital, sustainable, and satisfactory reasons for increasing the number of garments factories as well as the export quantities are mainly some special features; the personnel involved in the RMG sector is comparatively less payment. See More. 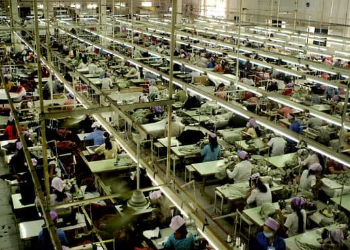