Production:  Receiving the buyer’s/buying house’s final confirmation, the garments production is started. Generally, the following steps are to be adopted for the initiation of the production:

In business generally, the term “Layout” is used to denote the suitable position of every item so that the production output can be made more. In garment industries, the layout is used to entail the overall production of garments per line.

In the case of layout, in the garment industry, when a new style is initiated, the concerned line related persons including the experts of production such as GM, PM, Line chief, controller, technician, and other well-known persons engage themselves in setting the machines of the line (in Designer Jeans Ltd generally 68-75 machines are included in one line) should make accordingly so that the overall production status can be highest.

In the beginning period, the machines are to be transferred from one place to another because of high production. In the line, generally, some machines may be required and/or some may not be required so the decision should be taken properly.

The required machines should be selected on the basis of a variety of styles and requirements. However, in case of smooth and high production starting, every concerned person is to be alert all time so that the machine set up and production capability and the quality remained at the expected level.

For proper layout initiation, the concerned and vital persons for the practical production planning must be more alert and dutiful as if they could not understand the actual positioning of the machines; the production can not be conducted accordingly. Sometimes he is to sit on the machine to direct properly to show the true picture of the production starting by the worker. The expert worker can easily realize the production process of garment making. However, as the layout of production is based on every person and every machine on the line so the concerned persons should be consistent in their respective responsibility.

In a particular line generally, the following machines are to be present:

These machines are needed for the production of garments in case of different styles some extra machines are also required as:

Before starting production some other machines are required to process the initial stages which are:

In case of the finishing stage the below machines are required:

To know more about the textile and garments industry 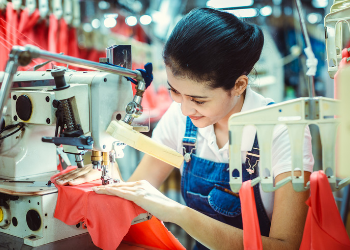